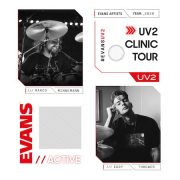 !!THIS EVENT HAS NOW FINISHED!

If you’ve been to one of our drum clinics before, you’ll know how inspirational they are and this  time it will be no different…

Two drummers at the top of their game will be in da DD house.

THIS EVENT HAS NOW FINISHED

(No age restrictions. No refunds/returns. See our T&C’s for more info).

To celebrate the launch of UV2, Evans Drumheads are hosting a UK clinic tour, with two of the biggest names in drumming, Marco Minnemann and Eddy Thrower!!! Throughout the tour, Marco and Eddy will be delivering four intimate performances and hosting live Q&As themselves.

Widely regarded as one of the most respected and influential drummers worldwide, Evans and Promark artist, Marco Minnemann, has built a hugely successful solo career, alongside his work with instrumental supergroup, The Aristocrats, with whom he has toured extensively and released four studio albums. Prior to this, Marco has toured and recorded with some of the world’s biggest names, including Steven Wilson, Joe Satriani, Plini and many more.

Evans and Promark artist, Eddy Thrower, shot to fame as the drummer for alternative rock four piece, Lower Than Atlantis, where he played some of the biggest venues and festivals around Europe. Since the band’s 2019 split, Eddy has performed with some of the world’s biggest artists, including a European arena tour with Busted, and a tour of China with pop superstar Dua Lipa. 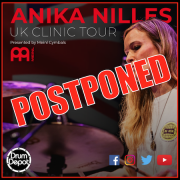 Want to join the discussion?
Feel free to contribute!

This website uses cookies to improve your experience while you navigate through the website. Out of these, the cookies that are categorized as necessary are stored on your browser as they are essential for the working of basic functionalities of the website. We also use third-party cookies that help us analyze and understand how you use this website. These cookies will be stored in your browser only with your consent. You also have the option to opt-out of these cookies. But opting out of some of these cookies may affect your browsing experience.
Necessary Always Enabled
Necessary cookies are absolutely essential for the website to function properly. These cookies ensure basic functionalities and security features of the website, anonymously.
Functional
Functional cookies help to perform certain functionalities like sharing the content of the website on social media platforms, collect feedbacks, and other third-party features.
Performance
Performance cookies are used to understand and analyze the key performance indexes of the website which helps in delivering a better user experience for the visitors.
Analytics
Analytical cookies are used to understand how visitors interact with the website. These cookies help provide information on metrics the number of visitors, bounce rate, traffic source, etc.
Advertisement
Advertisement cookies are used to provide visitors with relevant ads and marketing campaigns. These cookies track visitors across websites and collect information to provide customized ads.
Others
Other uncategorized cookies are those that are being analyzed and have not been classified into a category as yet.
SAVE & ACCEPT
Scroll to top